Bacon and other processed meats can cause cancer, health organization says

The World Health Organization says eating beacon and other processed meats can increase the risks of cancer in humans. Groups representing the meat industry reject the findings. 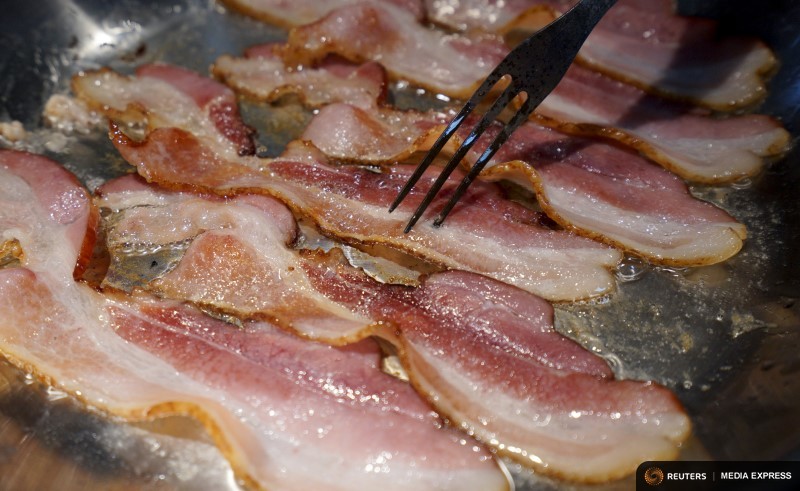 Bacon is fried up in a pan in a kitchen in this photo illustration in Golden, Colorado, October 26, 2015. The World Health Organization says eating beacon and other processed meats can increase the risks of cancer in humans. REUTERS/Rick Wilking

(Reuters) – Eating processed meats like hot dogs, sausages and bacon can cause colorectal cancer in humans, and red meat is also a likely cause of the disease, World Health Organization (WHO) experts said.

The review by WHO’s International Agency for Research on Cancer (IARC), released on Monday, said additionally that there was some link between the consumption of red meat and pancreatic cancer and prostate cancer.

IARC classified processed meat as “carcinogenic to humans” on its group one list along with tobacco and asbestos, for which there is “sufficient evidence” of cancer links.

Each 50-gram (1.8-ounce) portion of processed meat eaten daily increases the risk of colorectal cancer by 18 percent, the agency estimated.

A 50-gram portion would be the equivalent of eating one hot dog or two slices of bacon. Americans eat about 21.7 grams of processed pork per day, according to a 2011 National Health and Nutrition Examination Survey.

Red meat was classified as probably carcinogenic in IARC’s group 2A list, joining glyphosate, the active ingredient in many weedkillers.

The IARC examined some 800 studies during a meeting of 22 health experts earlier this month.

“For an individual, the risk of developing colorectal (bowel) cancer because of their consumption of processed meat remains small, but this risk increases with the amount of meat consumed,” Dr Kurt Straif of the IARC said in a statement.

The classification for red meat, defined as all types of mammalian meat including beef, lamb and pork, reflected “limited evidence” that it causes cancer. The IARC found links mainly with colorectal cancer – which is a cancer that starts either in the colon or rectum – but also observed associations with pancreatic and prostate cancer.

Inconclusive evidence of a link between processed meat and stomach cancer was also observed, it said.

Some scientists and researchers said the news may not add much to long-standing health recommendations to limit consumption of such meat.

The IARC does not compare the level of risk associated with different substances in a given category, so does not suggest eating meat is as dangerous as smoking.

“Nobody is telling people not to eat meat,” said David Wallinga, senior health officer for health and environmental advocacy group Natural Resources Defense Council. “What they’re saying is if you eat it, eat less of it and buy it from sources that have produced it better.”

Shares of most meat companies were little changed on Monday. Tyson Foods Inc. fell after a rating cut by JP Morgan to “neutral,” which focused on the company’s shrinking market share in packaged meat.

“I’m not expecting that (IARC) report to be a big issue going forward,” said Brian Weddington, a vice president of Moody’s Investors Service’s corporate finance group. “I think there’s still going to be a lot of hot dogs sold tomorrow.”

The medical community has long thought there could be a link between red or processed meat and colorectal cancer, said Tim Key, a professor at Oxford University.

“Eating a bacon bap [sandwich] every once in a while isn’t going to do much harm; having a healthy diet is all about moderation,” Key said in a statement from charity Cancer Research UK.

(Reporting by Gus Trompiz in Paris and P.J. Huffstutter in Chicago.; Additional reporting by Estelle Shirbon, Martinne Geller and Ben Hirschler in London, Rod Nickel in Winnipeg, Canada, and Theopolis Waters in Chicago.; Editing by Jo Winterbottom and Cynthia Osterman)