Building bridges as an expression of faith

In Charlotte this week, American Baptist Churches of the South (Area III) is holding a two-day conference focused on cross-cultural and cross-racial outreach. 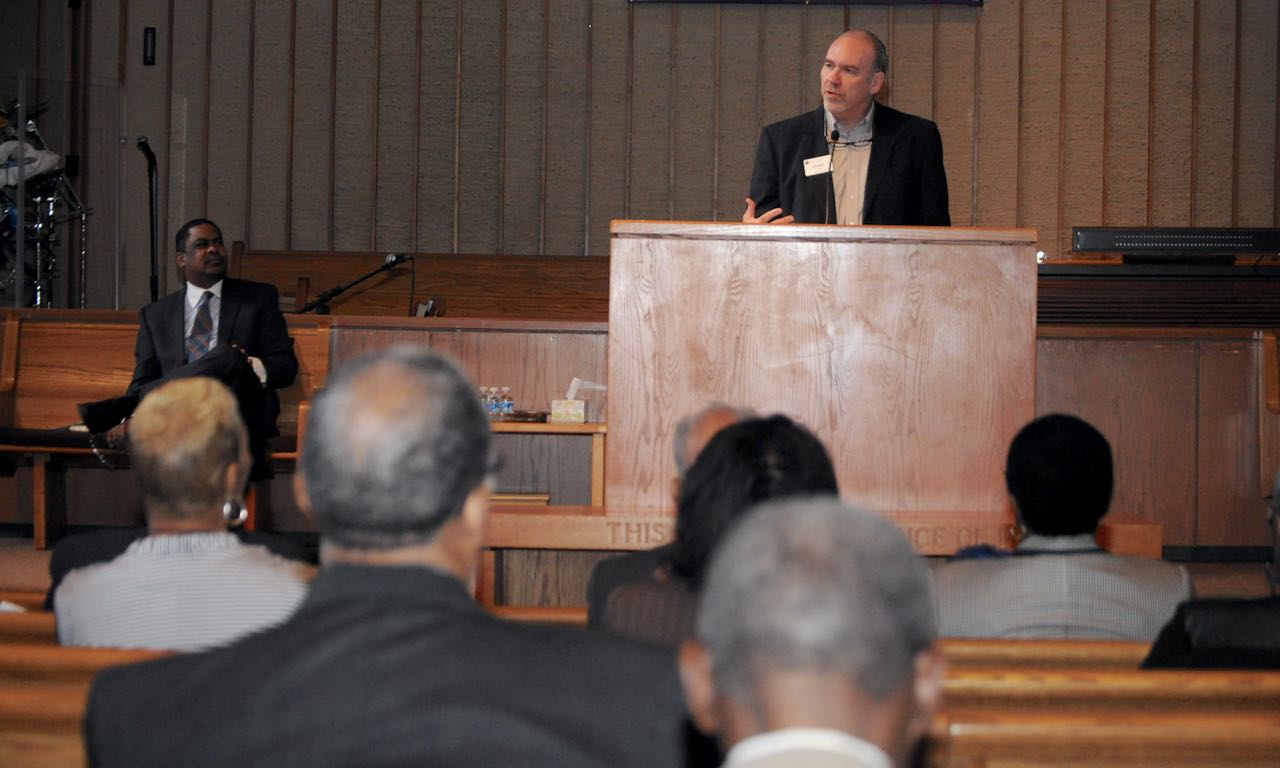 Rev. Danny Trapp of MeckMin addresses the 45th meeting of American Baptist Churches of the South (Area III), where he encouraged members to reach beyond race and class and culture as an expression of their faith. (Photo: Glenn H. Burikns for Qcitymetro.com)

The American Baptist Churches of the South (Area III) held its 45th meeting at Charlotte’s First Baptist Church-West. The theme of the two-day conference: “Building Bridges and Developing Relationships as an Expression of Faith.”

ABCOTS was formed in 1970 “to develop a more inclusive witness across the divisive barrier of race,” according to the organization’s website, which lists Myers Park Baptist Church and Mt. Carmel Baptist Church, both of Charlotte, as founding members.

Here are some of the speakers who addressed the conference:

Friday’s session opened with Rev. Danny Trapp of MeckMin challenging attendees to reach out beyond their tight-knit communities, even if it involves taking some social and cultural risks.

“Be a community that takes action and go out of your comfort zone,” he said. “It’s easy to develop a relationship with folks who look and act and talk just like us and come from the same place we do.”

Reaching out to others, he said — “That’s what we need in this country, if we are going to live out God’s call to us.”

Dianne English, executive director of Community Building Initiative, a nonprofit organization established to achieve racial and ethnic inclusion and equity in the Charlotte-Mecklenburg community, spoke of the need for racial reconciliation. I asked if she felt encouraged by what she sees in the way of bridge building.

She thought for a moment and said….

“I think I’m more pragmatic. I think the work needs to be intentional and people need to be focused. I think the importance right now is looking at the systemic. How do we look at what is in the ground, what is in our institutions, what’s in our organizations and structures.”

She told the group about going to Selma with three friends this summer to walk across the Edmund Pettus Bridge, which she described as an emotional journey she felt she needed to take.

“The most amazing things happened,” she said. “We met people we hadn’t expected to…but it was the bridge; that’s what I wanted to do for myself.”

English told the group that, during the Civil Rights Movement, she was a student at UNC Chapel Hill and did not take part in the marches or protests.

“I was not actively involved in the Civil Rights Movement, although I could have been,” she told me later. “That was the pain of going into Alabama and seeing the Freedom Riders and the stories and the commitment. I don’t know if I would have had the courage, but I did not allow it to be part of my consideration.”

America is still plagued with racial and social injustices that point to a lack of community, said Dr. Ophelia Gorman-Brown.

“We live more than ever in a segregated environment,” she said, noting that social media has made it possible to talk with people a world away while at the same time ignoring our neighbors.

Churches, too, exist in this ever-changing landscape.

Gorman-Brown, a Charlotte physician and ordained minister, is also chairman of the city’s economic mobility task force. She said the civil unrest in Baltimore earlier this year was an example of what can happen when young people have no economic opportunity and no hope, and she challenged the black church to reclaim its leadership role in pushing for social and economic justice.

Gorman-Brown said the black church’s bridge-building efforts must also extend to same-sex couples. And when challenged by a conference attendee who labeled same-sex marriage as “sinful,” Gorman-Brown stood her ground, insisting that as a physician, she believes gays and lesbians are acting within the framework of how God created them.

Patrick Graham, CEO of the Urban League of Central Carolinas, reminded the group that throughout history, “African Americans have been one of the primary gate crashers for democracy.”

The hard-won victories of the Civil Rights Movement, he said, laid the foundation for later movements, including the women’s movement, the gay rights movement and the current push for Latino and immigrant rights, he said.

Graham said the church must lift those in need out of their current conditions, and he cautioned the group to avoid becoming complacent while doing good.

“Sometimes in philanthropy, we do just enough to make people comfortable where they are.”

“Are we going to be courageous enough to do the things that God want us to do,” he said.

And he challenged the group to get involved, especially in helping to guide vulnerable young people, just as our forebearers once did.

“It is in congregations, it is in faith, that we must restore a movement that we lost,” he said.

If America is to build bridges that span race and class, we must all become better listeners, said Willie Ratchford, executive director of the Charlotte-Mecklenburg Community Relations Committee.

“Sometimes we are just not good listeners,” he said. “If you are going to be an active listener, it simply requires that you take your time, here what the person has to say…and then you can respond to the person in an appropriate way.”

Ratchford, whose agency is charged with enforcing the city’s fair housing laws, said racism exists today as much as ever, but often the victims never know it.

“Those who engage in racism and discrimination these days are very subtle,” he said, referring to it as “have-a-nice-day racism” or “racism with a smile and a pat on the back.”

He said that each year about half the complaints of housing discrimination investigated by his agency prove to be accurate. But when it comes to discussing and addressing racism, he said, the two sides are typically miles apart.

“White folks and black folks see race very different in this country,” he said. “We are polar opposites when it comes to looking at this thing called race.”

For that reason, Ratchford said, whites must hold other whites accountable, while blacks demand accountability within our own communities.

“Many white folks don’t want to hear anything about race from black folks because they think we’re just whining and complaining,” he said.

Two areas in which blacks must demand accountability from one another are in the areas of crime and out-of-wedlock births — both of which, he said, are contributing to a permanent black underclass.

“If young black men are a problem in this community, then the solution is black men.”