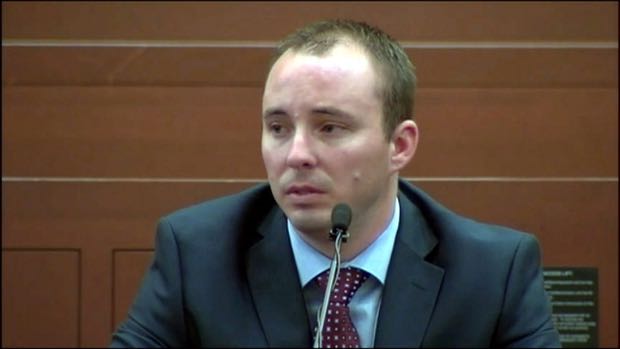 Charlotte-Mecklenburg police officer Randall Kerrick testifies during his trial on charges of voluntary manslaughter. He was accused of using excessive force when, in the fall of 2013, he shot Jonathan Ferrell, an unarmed accident victim, 10 times. The trial ended with a hung jury, and prosecutors elected not to retry the case.

The City of Charlotte has agreed to a financial settlement with Randall Kerrick, the Charlotte-Mecklenburg police officer who shot and killed Jonathan Ferrell, an unarmed black man, in 2013.

In exchange for Kerrick dropping all future claims against the city, taxpayers will pay a total of $179,989.59. The bulk of that money — $112,935.98 – will go directly to Kerrick, who resigned from the Charlotte-Mecklenburg Police Department effective Oct. 2.

The city also agreed to pay:

• $50,630.80 to attorney Robert D. McDonnell, who represented Kerrick in a civil suit brought by Ferrell’s family.

Kerrick, who is white, shot and killed Jonathan Ferrell, an unarmed black man, during a late-night encounter in east Charlotte. Kerrick was charged with voluntary manslaughter and saw his trial end with a hung jury. State prosecutors elected not to retry the case.

Critics of the prosecution argued that Kerrick should not have been charged with shooting Ferrell, which some called justified. The jury voted 8-4 in favor of acquittal.

The city earlier this year settled a civil suite with Ferrell’s family for $2.25 million.

The city will pay no legal expenses for Kerrick’s criminal defense, and the agreement contains “no admission of fault or liability” and includes a release of all potential legal claims, the city said in a statement.

According to that statement, City Attorney Robert Hagemann concluded that, given the outcome of Kerrick’s criminal trial, the city would likely be found liable for the expenses covered in the separation agreement if the matter were litigated. The agreement releases the city from future liability.

Ferrell’s death and Kerrick’s trial became a flashpoint in Charlotte at a time when police tactics nationwide were under growing criticism, especially in relation to police treatment of black suspects.

Ferrell, a former football player at Florida A&M University, was shot 10 times by Kerrick after Ferrell wrecked his girlfriend’s car in east Charlotte and encountered Kerrick and two other CMPD officers nearby. CMPD investigators concluded that Ferrell was simply seeking help before he was shot. However, Kerrick’s defense attorneys argued that Ferrell, who had been drinking that night and had smoked marijuana at a co-worker’s home, was acting erratically and ran toward Kerrick when ordered to stop.

As a result of Ferrell’s death and the outrage it produced in some parts of the city, CMPD officers are now assigned to wear body cameras to record their interactions with the public.

In Thursday’s statement, the city said, “CMPD remains deeply committed to a review of its policies and training related to the use of force. CMPD will also conduct an internal review of the shooting of Ferrell, as it does for all officer involved shootings. Often those reviews lead to more refined police policies and training.

“CMPD also remains committed to increased emphasis on community and police relations. The Cops and Barber dialogues and other community outreach efforts remain a high priority for developing a greater understanding between members of the community and the police that serve them.”