A local minister serves God by helping others get fit

Jacotron Potts never set out to be a fitness instructor. But after listening to a sermon that stressed the importance of serving others, he formed an exercise group on his Facebook page. 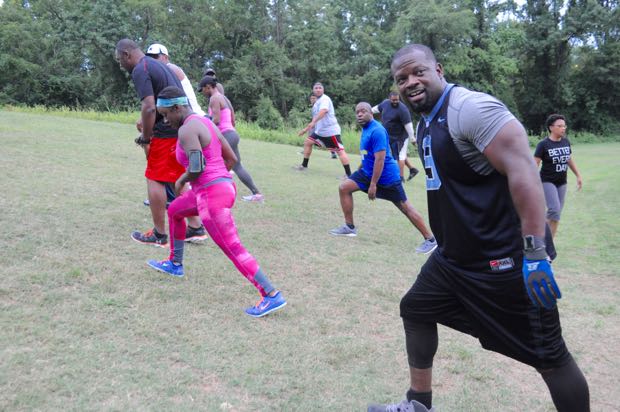 Jacotron Potts never set out to be a fitness instructor. But after listening to a sermon that stressed the importance of serving others, he formed an exercise group on his Facebook page. (Photo: Qcitymetro.com

Jacotron Potts never set out to be a fitness instructor. Yet there he was, in Charlotte’s Revolution Park, leading a group of about 25 people in various exercise moves as they trudged up and down a steep, grassy hill.

“Leg day is the best day,” he shouted to the men, women and children, all grimacing through a series of muscle-burning maneuvers designed to strengthen the lower body.

Try as you might, you won’t find this class on any bulletin board or Internet search engine. It sprung up on Facebook and quickly grew to more than 30 regular participants — illustrating the power of social media and the determination of one man looking to make a difference.

Potts, an ordained minister and worship leader at The Park Ministries, said he started the fitness class after hearing his pastor, the Bishop Claude Alexander Jr., challenge the congregation to adopt a “PCS lifestyle” – lives devoted to praying, caring and sharing with others.

At 6-foot-3 and 259 pounds, Potts has the build of a NFL linebacker, so it was not uncommon for people to seek him out, requesting to join his individual workouts. So after hearing his pastor’s inspirational message, he extended an open invitation on his Facebook page.

That first week, he said, only four people showed up. But then, as word spread, his outdoor classes began to grow – 10 people, 15 people, 25 people, and eventually topping out at more than 35.

The classes, which started in July, are held four days a week, with Saturday reserved for low-impact abdominal work. Unfortunately, it’s all scheduled to end in early September; Potts never set out to be an exercise instructor, only to introduce more people to physical fitness.

Although the classes are open to all, Potts said he uses each occasion to sprinkle in some spiritual encouragement. And each class, he said, ends with a group prayer.

“I think the most gratifying part has been seeing the families come out and work out together,” he recently told Qcitymetro. “Toddlers who have been sitting in their strollers are attempting to try and do some of the workouts on the field. That has been most rewarding because now we are developing a legacy of not just faith but fitness.”

On a recent Monday, more than 20 people showed up to sweat and move, including several children. For more than an hour, they ran, hopped and crawled up and down the grass-covered hill, pausing only for brief water breaks.

Potts called it a “no-pressure workout,” where everyone is encouraged to go at his or her own pace.

“Like I tell people, this is not a formal class,” he said, “just a place for people to come with family and friends, so we can support and encourage each other to be better.”

Johnette Karpeh, who also attends The Park Ministries, said she first heard about the group workouts on Facebook and decided to add it to her already-ambitious exercise schedule.

“I like to switch up my workout routines frequently so my body will not get used to the same things,” she said. “I think its just a great experience and a great thing he started. It’s something about workout outside and the positive vibe. And the spiritual aspect is great also.”

Karpeh said Potts “brings a lot of fun, challenging and creative drills to the hill each week,” which has contributed to her dropping four pounds in a matter of weeks.

But losing weigh, Potts said, is not the primary focus of his workout group.

“Oftentimes we look for the external results first,” he said. “But we immediately see internal results when you start to move and sweat. You release the toxins in your body. Your body feels so much better and you get energized.

“You may not have the weight loss, but you have an internal gain because you feel totally different mentally and emotionally when you go out and start your day after a good workout.”

Now that the classes are winding down, Potts is introducing the group to local trainers, hoping the people he attracted will latch on to established fitness programs. But for how, he said, he feels gratified by what he started.

“I’ve benefited more by being able to see what God is doing in the lives of other people as a result of them coming there,” he said. “I’ve been encouraged.”

proper nutrition: “Like I tell people, eating is training. If you’re not eating right and are just getting out doing the training, you are not going to see the benefits that you want to see on the scale numbers or the blood work numbers that you get from your doctor.”

women, hair and exercise: “I understand the difficulty when it comes to the African American woman, who has a unique challenge when it comes to hair and being able to present themselves in a manner that they want to. But I’ve seen women come out here and literally sweat out every piece of perm they had in their head because they had a commitment to health was greater than hair. Sometimes fashion can get in the way of fitness, so you have to decide what the trade off is going to be.”