By Katherine Peralta | The Charlotte Observer The John S. and James L. Knight Foundation is investing $1.5 million over […] 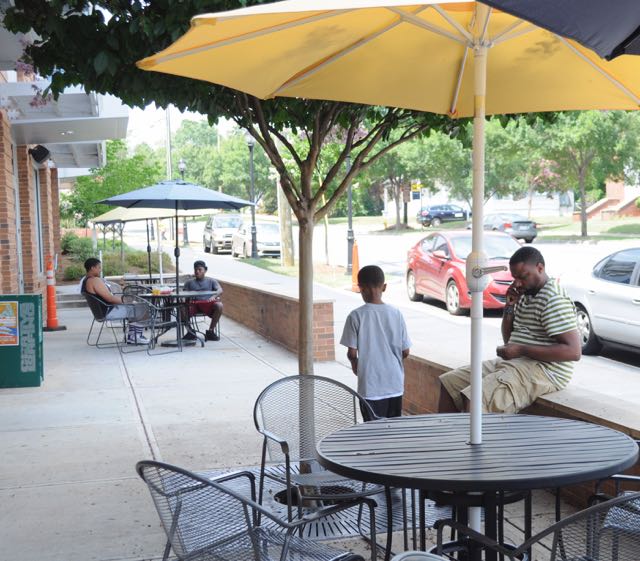 A group of young men relax outside of Mosaic Village Tuesday, June 30, 2015. The mixed-use development sits along a section of Beatties Ford Road that will be part of a $1.5 million revitalization effort sponsored by the Knight Foundation. (Qcitymetro file photo)

By Katherine Peralta | The Charlotte Observer

The John S. and James L. Knight Foundation is investing $1.5 million over three years to help revitalize Charlotte’s Northwest corridor, along the site of the upcoming Gold Line streetcar.

The effort is being spearheaded by Charlotte Center City Partners. Michael Smith, CCCP president and CEO, said part of the work the group will do in the first six months of the project is determining how to create sustainable funding for the endeavor through public and private investment.

“This is a natural extension of the work we do,” Smith told the Observer Tuesday morning. “This has been a corridor that we care a lot about.”

J’Tanya Adams, who chairs Historic West End Partners, told Qcitymetro the idea dates back to 2008, when she, then head of a predecessor organization called Urban Culture Arts Association, approached CCCP with a similar idea. The idea was revived about a year later, she said, when Johnson C. Smith University got involved.

“The day has arrived,” Adams told Qcitymetro. “I think it is a positive move, a timely move.”

Adams said the grant would target an area that extends from Interstate 77 and West Trade Street and running westward along Beatties Ford Road to the Brookshire Boulevard overpass.

The grant is effective July 1. CCCP will begin by hiring a director of Historic West End, Smith said.

Ron Carter, president of Johnson C. Smith University, said a rejuvenated West End could be the area’s answer to South End. He said he envisions the area as a draw for local businesses in particular.

Carter also said he foresees the revitalized neighborhood, which his university anchors, as a combination of Greenwich Village in New York and the area around George Washington University in Washington, D.C.

“It will represent the best of what any city can be when it takes very seriously its commitment to diversity and inclusion as well as to the new demographic majority that will have a place in Charlotte,” Carter said. “It will represent what happens when the public side, the business side, the education side come together.”

The largest driver for business growth in the area is the City LYNX Gold Line, a $160 million project to be completed in 2019 that will link northwest neighborhoods to Uptown Charlotte.
“If we can improve the commercial corridors of this neighborhood, it’s amazing the ripple effect that can have,” Smith said.

Qcitymetro contributed to this report.