A family commits to healthier living 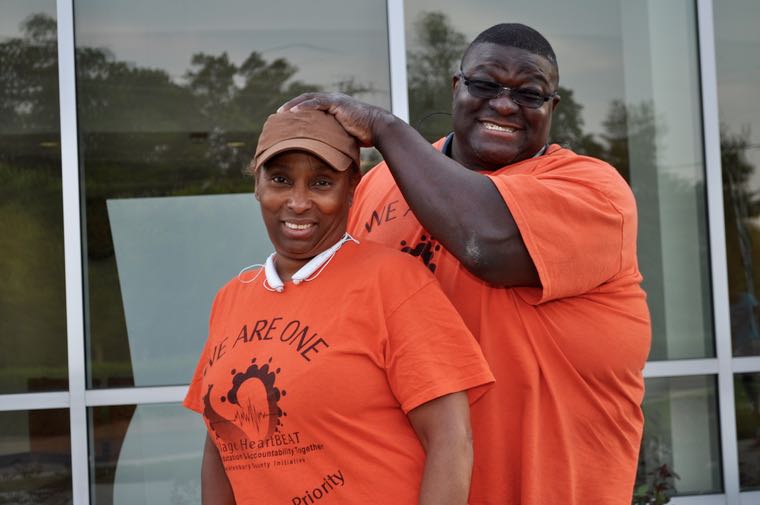 Their story: For Melvin Austin, it began as a need to get in shape and get well. For Slyvia Austin, it began as a choice to support her husband of 14 years, who is battling obesity and taking blood pressure and water pills. In the year since the couple joined the Village HeartBEAT program at their church, they’ve experienced some changes, both individually and as a family.

Mr. Austin, who has gone from 399 pounds to 370 pounds, said the hardest part for him has been finding time to exercise. As a truck driver, he doesn’t work a 9-to-5 schedule, so he walks whenever he can. He said his favorite thing is sleeping after a workout.

Mrs. Austin, who won the “biggest loser” competition at her church with a loss of 20-23 pounds, said the hardest thing for her has been eating right. Before the program, she often ate just one large meal a day. They both agreed that the program has forced them to spread out their meals, to actually put things on plates and ensure proper serving sizes.

Aside from the pounds, Mr. Austin said he’s able to move around better, has more energy and stamina and sleeps better. Mrs. Austin said the program has given her a “burst of energy” to keep up with their three girls, ages 4, 7 and 9, who join their parents on exercise walks.

The couple said their biggest source of support has been their team members and coach, who will text or call to check on them and let them know about class locations.

Their advice: “You’ve got to stick with it…and being consistent and trying to be self-motivated, that’s the hardest thing. When you start off with a team and others go another way, you’ve got to fend for yourself…so you’ve really got to have that motivation.”

Quote: “You have about a million dollars around your belly. You didn’t get it over night, so you’ve got a big investment that you’re trying to get rid of, so it’s gonna take a little time.”

This article is part of a continuing series celebrating local residents who have made a decision to get healthier by enrolling in Village HeartBEAT, a 16-week wellness program designed to reduce risk factors, especially in the African American and Latino communities. The program, now in its third year, is sponsored by the Mecklenburg County Health Department and works primarily with local churches.